Last Friday, I made a pit stop at World Market in search of picture frames. Naturally, I walked out with no picture frames, but some gnocchi, Guinness potato chips, a chocolate bar with plantains and this bit of pet magic that was on the clearance pile.

My status update was :”Exciting Friday night planned! Don’t call. Don’t offer to take me out to eat. I will be CRAZY busy. ( and it was on clearance)” This was sarcasm. I totally would have gone out to eat.

Initially there was a lot of sniffing and investigating, but no one would venture inside.

Miles was brave enough to finally go inside, but was rewarded by Birdie who decided the best option was to smack the idiot inside the box.

I decided to relocate the box to the kitchen, and put treats inside. At least two of the cats had proven that they could slip in and out of the holes, so this should work out. Right? 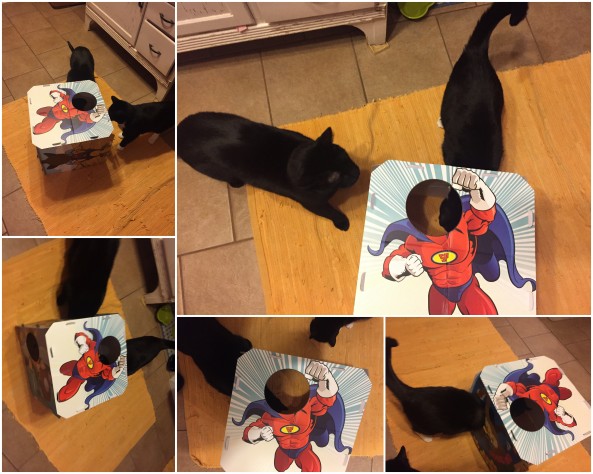 Olivia went inside the cube and, despite having already traveled in and out of the holes multiple times previously, somehow got stuck on her exit. Too much chub.

She then ran around the kitchen like a deranged turtle, bouncing off the cabinets until her cardboard shell exploded, and she escaped to the living room where she gave me crazy owl ears and angry meow-stache. She does indignant so well. 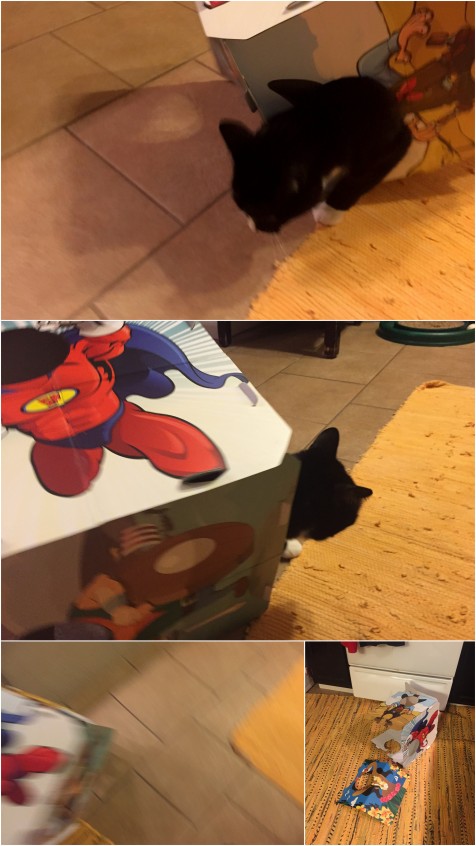 I gave up for the night. Only W. Charles was willing to work with me. 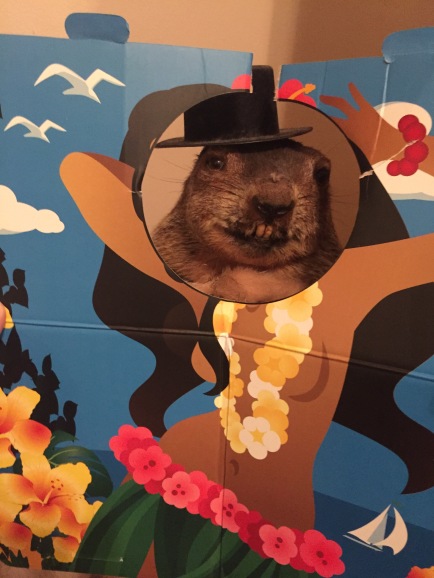 Plus I happened to check the blogs I follow, and discovered that Marc at Katzenworld had posted that very day about the exact same photo booth! While mine was in tatters because of my spastic fur children, his was intact as Oliver and Nubia posed beautifully inside it.

If my children were human, they would probably be the kids that teachers talk about at lunch time.

I repaired the photo booth as best I could, and left it out hoping that I would catch SOMEONE posing appropriately.

A week later on the following Friday, Birdie paused long enough in her racing around the house to poke her head through the hole like the tiny crazy person she is. Still not quite right, the hula girl is upside down. Sigh and eyeroll. 🙂