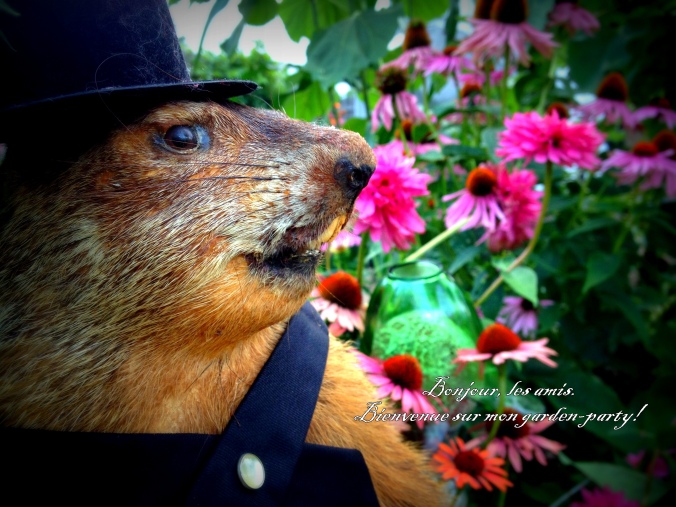 I had no idea he was French until I took this picture.

Last summer I was inspired by the symmetry of two giant sunflowers in my vegetable garden to conduct a self-portrait photo shoot . This year my eye was drawn more towards the profusion of colors in my flowerbeds. It’s as if my flowers spent the polar vortex planning how to be gigantic. I envisioned a backdrop of greens, fuchsias and yellows…and a dead groundhog who is in to formal wear. 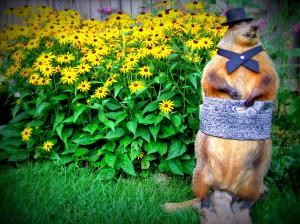 W. Charles Marmota completed his formal attire (my mom bought him the tie)  and was garden party ready. I could play dress up and we would be fabulous!

Unfortunately, I have boobs. I have really big, frighteningly massive boobs. When I’m both photographer and model, I can’t see what they are up to. The last time I wore the green dress, a friend double-side sticky taped the tops of my boobs to the vee of the dress so that all the wedding photos would not be my boobs photobombing the bride. It worked, mostly. I did not add that small detail to my photo shoot ensemble.

I wanted the flowers as a background, but height was an issue. Even sitting, I needed to be shorter or W. Charles and the flowers needed to be taller. Try to add poor Ross the Holiday Armadillo into the party and that created another problematic level of height. (Ross is really short.) Shooting straight on sent the eye straight into my cleavage where my waist had also been absorbed. Shooting from a higher angle worked only slightly better. Angling the camera up did not make a lot of sense and standing up was not an option since W. Charles is barely as tall as my knee. 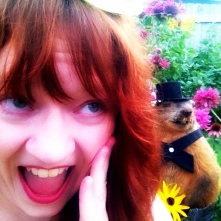 This would be better if I had a hand.

Perhaps I should have invited someone else to work the camera and keep my boobs in check, but which friend do I call to say, “Hey, my garden is really pretty so I’m going  to dress up with my dead groundhog and armadillo and take pictures! Want to help?”

I think W. Charles and Ross were the really successful ones. Ross totally rocks my hat.

Just a fancy groundhog and armadillo