My vet does a multi-pet discount which is why I find myself bundling cats like a new insurance deal. Of course, each cat approaches the Vet visit in his or her own way.

Does he like being manhandled and having his inner bits squeezed? No, but he does try to retain his dignity and is always a Star Patient. He’s such a star that when they brought him his own litter box, he peed AND pooped which means that he would not poop in the carrier on the way home. #winning! (He did barf up a hairball on the to the vet.)

Hours later, still wearing his star like a boss.

However Olivia Wigglebothum is mad as hell and talks shit about how she’s gonna cut a bitch the whole time. 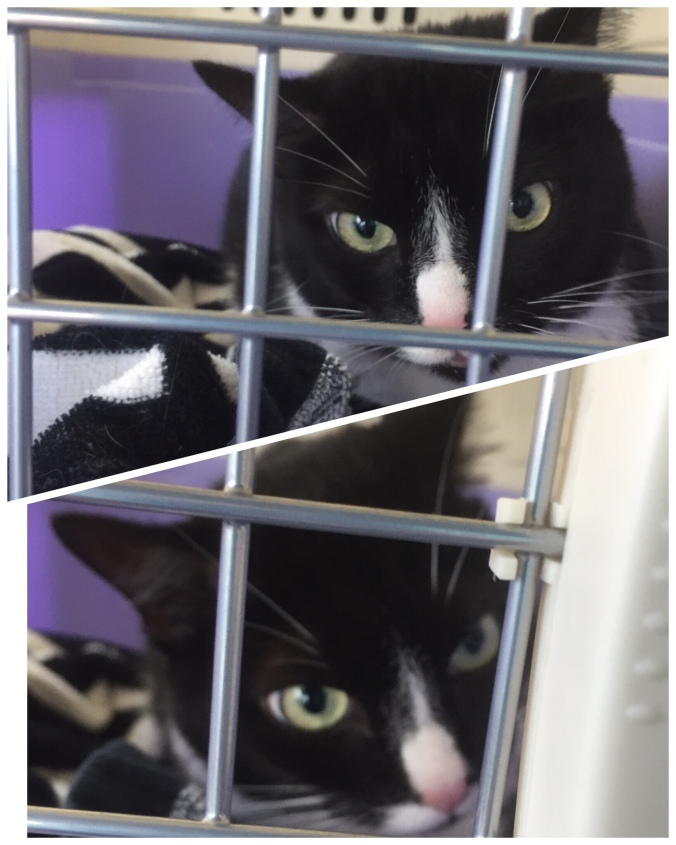 We call this Angry Stinkface.

Fortunately, she was just there to be weighed and then popped back into the carrier.

Sookie on the other hand employs the “if they can’t see me, the monsters can’t get me” approach.

She has nothing to say once in the carrier. At the vet’s office, she likes to re-enact that final scene of The Blair Witch Project where the guy is staring into the corner.

At one point she was up on her hind legs in the corner like a groundhog. I felt bad so I purritoed her until it was her turn.

How many cats in this picture? Answer: 3

Everyone had a good check up. We’re all healthy, just quite a bit fatter than needed. Cat Mom included