I don’t buy most of my cat nonsense. People just give it to me because… I am one dimensional and have no other interests? Any who I think they mean well. They like me. They know I like cats.

Students that I take to a summer camp felt the need to spend their pennies on me at the college bookstore and bestowed a cattitude of gifts upon me. One was this cat paw finger puppet.

Here’s the thing, these kids know me. We have spent a ton of time together, but they still did not think the implications through. Teenagers. Sigh. Eyeroll.

I immediately put the finger puppet on and excitedly said,”OMAHGAWD, you guys are going to spend the next year with this thing creeping into your peripheral vision! Imagine working in class and the paw taps you on the shoulder to be like ‘How ya doin’, buddy.'”

Their faces said that sadly they had not considered any of this, but they were already down the rabbit hole so they pulled up Amazon and showed me that they could have bought a full cat puppet for all my fingers at the bookstore. While that was nice, the “Handi-Squirrel” listed beside it was even better!

Me: “NOOOO! I NEED THAT!!!” When are these kids gonna learn?

Imagine this as a first day school accessory! Not everyone was on board though. My campers had no comments when I sent them a picture of the squirrel’s arrival. Olivia Wigglebothum was not having it.

Bird was trapped by her ruptured ACL. Squirrel luv Bird. 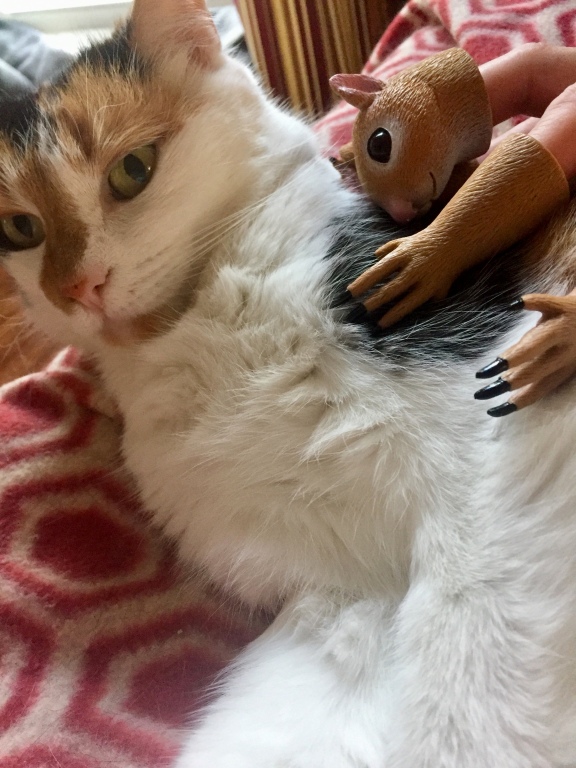 In this sequence it appears that the squirrel took down Miles like a lion on an antelope, but there was less of a struggle.

Miles and I can both attest that the tiny squirrel claws are good for head scritches.