It feels like it has been a while since we had to contend with negative wind chill temperatures and actual accumulations of snow. Olivia Wigglebothum brought the Polar Vortex in 2014 which was exciting. However last winter was so mild that my parsley overwintered. Fucking parsley.

This winter, I have to figure out how to dress like I’m harnessing my cat sled team for tundra travel, but spending the majority of my day inside at work looking “professional.” Mostly I want to go into hibernation mode. According to people who live in REALLY cold areas, “there is no bad weather, only bad clothing” and Ohioans should figure out how to dress for the weather and get over it. I feel like these people don’t get punched in the crotch enough.

Because I seem to advocate for crotch punching and profanity, a friend shared this app with me: What The Forecast?!! I set it on “obscene” and proceeded to share my forecast and freezing giggles with everyone. It was free fun!

The same friend and I signed on for our metro parks‘ winter hikes series. We did it last year, but last year was parsley-growing mild! What seemed like a good idea a month or two ago now seemed like a bad dare when Saturday morning’s forecast looked like this:

I sent her this forecast hoping she’d call my bluff and suggest that yes, we would be incredibly stupid to go for a hike in the woods. Even if there was soup at the end.

Unfortunately, we know that, unlike hibernating bears, we are not living off our body fat so much as adding to it during the winter. So we layered up like the little brother from A Christmas Story and chose the two mile option for the first hike of the season.

It was so cold that my phone died.

Given, I did have Pokemon Go open (we were in a metro park there were balls to get!), was trying to take a photo, AND got a text message at that exact moment which was more than my phone could take. Solution: tuck it into my ample bosom to warm it up.

Before my phone fainted from hypothermia.

It’s nice to be in the woods even if it is on a march with a hundred other people, and the sound of squeaking snow under boots is the equivalent of nails on chalkboard to me. Somehow I could still hear the birds, mostly blue jays, over the squeaking. Being among the trees is calming. It doesn’t take too much effort to find something beautiful in nature. Eventually, I got used to walking with my glasses frosted over. 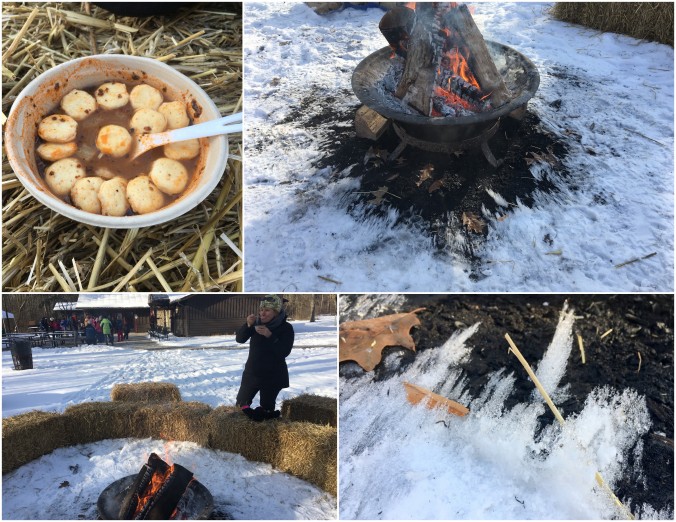 One of the perks of the winter hike series, besides getting some exercise, is the volunteers at the end. Each hike ends with volunteers serving hot cocoa, soup, and other treats. Last year, we practically had a full meal after one hike. This hike ended with veggie soup and a fire pit where it was comfortable enough to loosen up some of the layers. We learned last year that it is good etiquette make a small cash donation at the end of each hike, supporting the park programming. This time we signed on as “Friends of the Metro Parks.” Twelve more hikes to go! 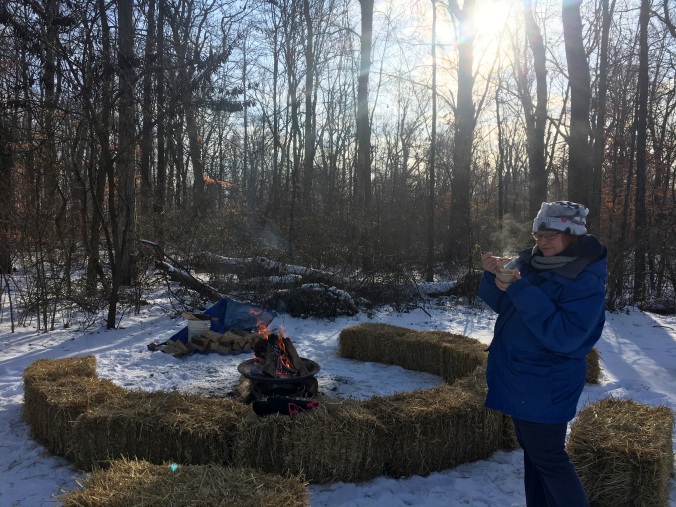 A new twist to this year’s hike series is donations to the Mid-Ohio Food Bank. The parks are encouraging hikers to bring non-perishables and personal care items to each hike for the donation boxes. We’re all just a jar of peanut butter and tube of toothpaste away from helping out.

If you’re in the Central Ohio area freezing your balls or lady parts off, check out the hike series.

17 thoughts on “You’re Gonna Freeze Your Balls Off…”