It’s the first day off no school! (I have a ton of stuff to do and will have to go back in the building, but without students!) I’ve been productively trapped by the gaping window of a delivery time. My seventeen-year-old washer and dryer set – my first big girl job purchase after adopting Bella Luna– was just not functioning like it used to and I finally resigned myself to purchasing a new set.

Workers in the house means packaging up four cats into bedrooms along with water bowls and litter boxes. Seventy-five percent of my population would panic at strangers and noises and could unpredictably decide to dart anywhere. Twenty-five percent of the population is incensed that I have locked him into only one room of HIS house when there are workers to be overseen, and spent the day banging on the bedroom door and clawing at the carpet. He had a litter box, a water bowl, a bed, a window, and his girlfriend, but oooohhhh nooooo.

I spent the pre-delivery down time vacuuming everything which shut my captives up pretty quickly. Vacuums are scary. I even busted out the Bissell and shampooed the carpet! Mostly, this happened because I had to move it out of the laundry room along with a  myriad of other items so the delivery guys could reveal the accumulation of “ick” when they removed the old washer and a dryer.

Things under and behind the washer and dryer:

By the time they left me alone with my new appliances, my productivity was waning and I needed food. A friends homemade hummus plus some goat cheese, with cilantro that re-seeded itself, and an entire salad of a very young onion, lettuce, kale, and spinach from the garden.

I love being able to go foraging! 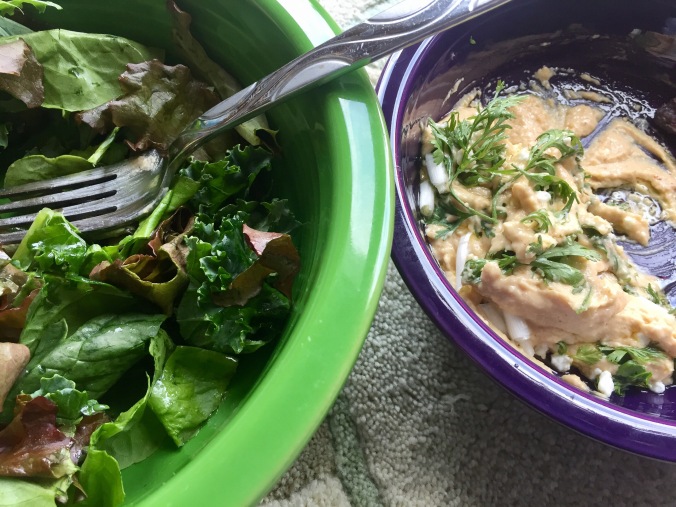 4 thoughts on “First Day: Thanks Garden”