Yesterday I went to a fleamarket/ antique “extravaganza.” I’d been to the location before when there had been a minimal number of vendors, so in my head I was sure this would only take a few hours and then I’d be off to do other Saturday things.  Five hours later I was sunburned, slightly lost, and had spent more money on food and beverages than on junk. There was row after row spiraling around in no discernible pattern, covering what seemed like the entirety of the fairgrounds. Vendors were tucked in everywhere including some of the animal barns. I felt like I wandered in circles with only a giant ice cream cone and a line of porta-johns as my most recognizable landmarks. I’m a big believer in rows at events like this because I like to be systematic and not miss anything. At the end of the five hours when I was left with a vague sense of deja vu about my surroundings, I was still pretty sure that I had missed some pockets of vendors. There was just SO MUCH STUFF! It was amazing!

One thing I did not miss and actually wandered by multiple times was a taxidermied canoe full of critters. I am certain that I was in the presence of TaxidermyJim whose work I had seen on Etsy and eBay. How many canoes full of two raccoons, a fox, a beaver, and a badger can there be in the world? 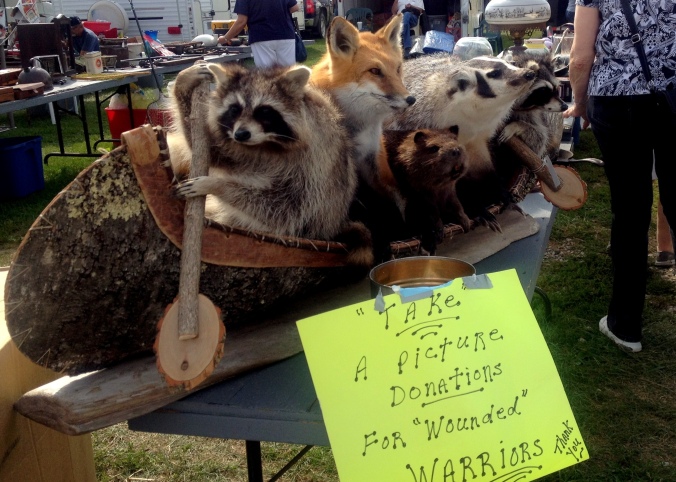 Yes, I made a donation. 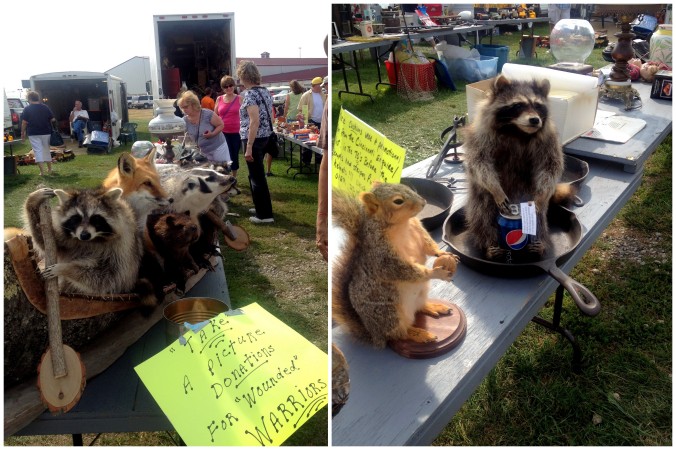 Look in the back of the truck.

He had other smaller mounts out on the tables, but the second big draw was the back of his u-haul style truck. Every time I wandered by, he was holding court like a taxidermy rock star with onlookers gaping at the number of bobcats, opossums, squirrels, and raccoons posed in the back of the truck. I got close every time hoping to hear someone actually mention a price. The only tags on the mounts was information about his licensing as a fur seller and taxidermist. I never heard a single mention of a dollar value. Taxidermy = priceless?

On the lip of the truck bed, he had a tiny little chipmunk rowing a tiny canoe. I kept thinking, how much could that really cost? According to the ones I found online, quite a bit. However by my last stop by, it was gone.

I acknowledge that his work was out of my price range and that purchasing any of it would just add to the layers of crazy, but I hate going to things like this and not buying anything but lunch. Early on I had a soft serve ice cream cone and bottled water because that was the only booth without a line at lunch time. I just needed calories and liquid. Later I played food poisoning Russian Roulette with a “Texas Tenderloin” sandwich. I’m not 100% clear on what meat was involved. All I can say for certain was that it was deep fried and tasted okay.

Maybe it was that desperation to just buy something that drew me to an open suitcase full of mink stoles. Not just the pieces of fur, but the full on heads, tails, and tiny mink paws dangling as they all bit each other’s butts. They were jumbled together on a giant furry pile begging to be petted. Better yet there was a sign laying in the suitcase that said “Half off.”

When we were little, going to my grandparents’ for family events meant playing dress up. We had access to old dresses, shoes, hats, tons of ridiculous jewelry, and a group of minks. (No one wants to tell me what a group of minks is called. Maybe they never assemble in groups?) My grandpa was a big fan of going to auctions and buying mystery boxes of stuff so I’m not sure if the minks were accumulated from auction goods or something that my grandma wore when they were fashionable. I remember being more amused by them than grossed out, and they were essential accessories to our pretend wardrobe. I have no idea what happened to them. I don’t know if a cleaning spree cleared them out, or if one of my awful aunts carted them away.

I listened to the vendor’s spiel about how the half off sign was supposed to be on a different table, how the color I had chosen was extra special and rare, but that she could do better on the tagged price.  So I bought a soft champagne group of three for $20; my big purchase of the day. Such an odd modern fashion choice to drape ourselves not only with furs, but the tiny clawed paws and faces of our catch. And, no, I can’t logically explain my love of animals combined with a fascination with taxidermied creatures.

All I knew is that my cats were going to either love or hate these. 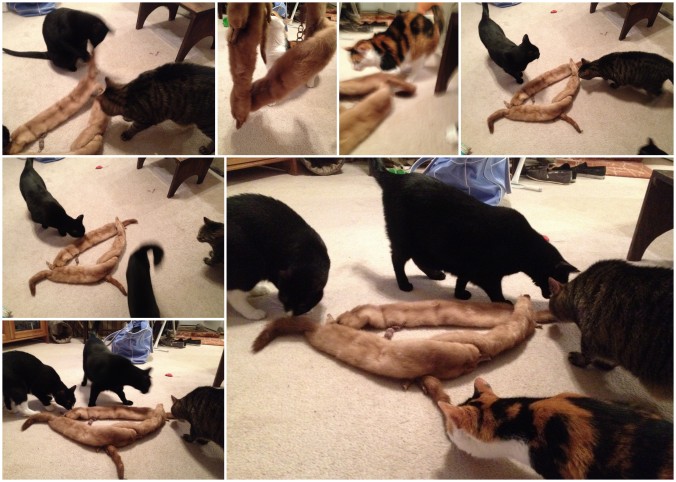 An immediate swarm and then done.

The cat fascination lasted for all of five minutes. Currently, the triplets are gracing W. Charles Marmota. He is a pimp daddy.

17 thoughts on “I am told that pimpin’ ain’t easy”