In my defense, (which I seem to start sentences with a lot) this was a baby shower game AND my second handcrafted Bloody Mary. The problem might be that I don’t really know how to make Bloody Marys, but proceeded with great enthusiasm. The babies were in ice cubes, we all got one in our drinks, and whoever’s baby escaped the cube first had to yell, “My water broke!” Thus winning the game.

I like Tabasco and vodka with my after birth.

The woman who won was drinking lava hot coffee and will henceforth be referred to as “Cheater! Cheater!…Fucking genius!” Baby shower games can be a bit cutthroat so the coffee angle was really a baller move on her part.

In either color- maybe  a little too after-birthy- or black and white, this makes a stunning birth announcement. 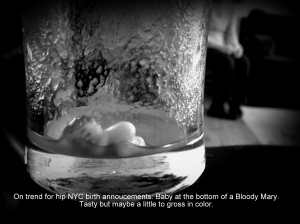 9 thoughts on “What Happens When I Get Invited Places…..”