I never get anything done. I accumulate projects like  a weird hoarder who just wants to tie-dye, paint, frame, re-organize, build, install, sew, bake, and bead everything around her. However there’s usually school work, cats, commitments, Candy Crush, episodes of The Big Bang Theory, and personal motivation to exacerbate my tendencies to procrastinate.

We had four major projects to accomplish. Through some nap-less, exhausting miracle, we got shit done.

1. Friday night we gathered supplies, and did all the dusting, taping prep work in order to wake up and  put the first coat of Summer Smile on the walls of my spare room that has been unpainted for the last five years. It’s a small room, but somehow all the furniture in it is movable only by great feats of strength. Mom and I did strap on our balls, but some stuff wasn’t going anywhere. So in cramped quarters, I ended up with paint on me at both ends.

2. According to the directions, it takes 2-4 hours before the second coat of paint can be applied. In those 2-4 hours, we ate lunch, wired the skull of a Scottish Highlander, and hung it. This involved the tippy top of the ladder, a stud finder that clearly needed new batteries, and some swearing. (It’s hard to keep Mom focused when she can see that there are things that need dusted.)

3. Also in those 2-4 hours, we installed four cat shelves. 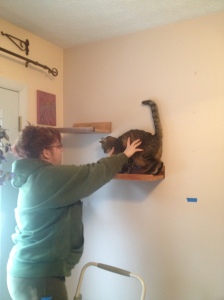 We tested each shelf after installation. The cats were just about done with me. 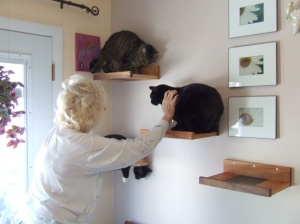 It’s hard to keep them all on the shelves at once. Kind of like…herding cats?

4. After applying the second coat of paint and ordering Tommy’s Pizza, we were allowed to fall over and go to sleep. That only meant waking up to the final task of assembling IKEA shelves. IKEA shelves that did not come with directions. Our only assembly clues came from enlarging the picture of the shelves on the website and reading forums where other unfortunates discussed how they had conquered the riddle of the IVAR three-section shelves.

Really, would it be so hard to put a few directions on the website, IKEA? You wouldn’t even have to include them with purchase of the shelves. Even the Swedes are frustrated. See:http://www.huffingtonpost.com/2013/11/12/ikea-furniture-police-sweden_n_4261376.html

Miraculously, we assembled the shelves in roughly two hours. The most troubling part was positioning them and determining how to anchor them to the wall so they would not fall over and impale any sleeping guests. 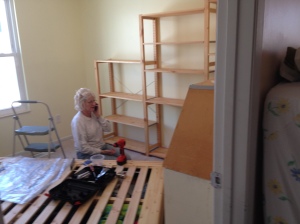 As you can imagine we felt very accomplished by the time Mom left on Sunday. The cats were exhausted from having another human in the house banging on things and vacuuming dry wall dust. Plus Saturday was Olivia Wigglebothums first official full day of freedom.

Olivia just wants to be like the big kids.

“Summer Smile” does not come out with the first wash.

7 thoughts on “The most productive 48 hours…EVER!”