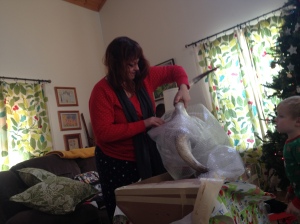 It only makes sense that the biggest box in the room and second to last Christmas morning present to open  (last was the nephew’s  Ninja Turtle hot wheel cycle) should have a head in it.

Well, it makes sense at our house.

My brother-in-law’s dad raises Scottish Highlander cattle (http://www.highlandcattleusa.org/). They’re big hairy, dreaded-up cows with a sweet set of horns. Over a year ago (I actually think it was two years), bro promised me a cow skull with horns. I suspect that he thought this would be an easy project. However Christmas rolled around and

Shaggy’s-yes, that’s his official registered Scottish cow name– skull was still tied to a tree to “dry out” and let scavengers clean off some of the goo.

On the next update, Shaggy was sun drying on a post with some other skulls. The smell was allegedly unbearable.

Then they attempted to boil Shaggy which involved two propane torches as heating elements because the skull is so big.

It’s really hard to get dead cow goo out of skull crevices.

I am told that fermented cow brains do not taste good. AND that they fly back into your mouth when you try to power wash them out of the skull.

My sister did not appreciate that her husband left cow bits in the shower after that episode. 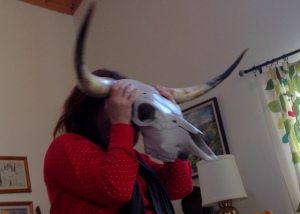 Not creepy at all.

However I appreciate that Shaggy made it home for Christmas.

***One friend commented that this was certainly an “upgrade” from the dance of the bras. Another serious and important Christmas tradition.